This insane 1971 Pro Touring Camaro rolling on Boze Clutch Concave wheels is featured in Super Chevy Magazine this month. Here’s what they had to say about it.

Making the choice to build a custom muscle car is not one to be taken lightly. For Dave and Jamie Smith of Blue Springs, Missouri, the stunning twin-turbo ’71 Camaro you see here came after much discussion and deliberation. The longtime car lovers are fixated on all things automotive related and wanted to own a car that turned heads no matter where it was displayed.

“We love cars, plain and simple. When we aren’t watching sports on TV the channel is usually tuned to some car restoration, auto auction programming, or movie about a car,” says Dave.

“A few years ago, Jamie and I decided we wanted to see what kind of creation we could come up with. We wanted the looks to stay true to the original car in most respects, but wanted the power, suspension, and creature comforts of today’s modern cars.”

This is a refrain we hear often at Super Chevy, and it’s perhaps never been more prevalent than it is today with old-school muscle cars. Thanks to the talents on display by many highly skilled builders, an owner can select from a plethora of modern high-performance options, from fuel injection to overdrive transmissions, to truly create the car of their dreams that accelerates, handles, and stops as well as—or better than—any of today’s high-dollar sports cars.

One such builder is The RestoMod Store (TRS), owned by Mike McLin and his sons. We’ve covered the company’s builds previously, and the team has displayed such a high level of talent when it comes to building cars such as this, that it was an easy choice for Dave and Jamie to drop the Camaro off there for the full treatment.

“It was apparent from the start that they had a passion for cars and shared our vision of what the build could become,” says Dave.

The project, which began life as a bumblebee Camaro with yellow pigment and black rally stripes, has certainly come a long way from its humble beginnings. Once The RestoMod Store had the vehicle in the shop, they quickly
discovered that it wasn’t in the best condition.

“After tearing apart the Camaro it was evident that time was not kind to our car. I often kid Mike that the inner doorframes are the only things left from the original car. We would have been better off starting from scratch than to have tried to restore this car,” says Dave.

It’s a conundrum many owners face when an old muscle car is stripped down to its bare bones and unexpected body damage is discovered. Do they continue or throw in the towel and start anew with another candidate?

“Jamie and I went back and forth on whether or not to proceed with the build—it was a split decision. I wanted to scrap the car and look for a better candidate. She felt that we had already come this far and should see the build through to the end. I’m glad she won that decision,” Dave says.

And thus, the car gained a name.

Once the build began in earnest, Dave and Jamie worked hand in hand with The RestoMod Store staff to develop an idea of what the car would be. It centers around a simple drivetrain choice: the excellent-performing LS3 crate engine from Chevrolet Performance, in this case improved with the use of a custom camshaft from Comp Cams. One of Top Street Performance’s aluminum intake manifolds was set atop the engine to boost performance and improve its looks. Remember that word: boost. A Concept One beltdrive system was set into place on the front of the engine and a pair of their valve covers placed atop the LS3 cylinder heads to finish off the engine’s appearance.

But they didn’t stop there. Oh no, that’s just the beginning of what sprung from the ashes of the rotted-out shell. A pair of Precision Turbo turbochargers was placed into the empty area in front of the engine, which means that this Camaro makes enough horsepower to obliterate the tires at will. Chris McLin at The RestoMod Store was tasked with assembling the engine and its attendant performance parts prior to installation.

Nicholls Performance Transmissions assembled a trick 4L80E transmission, with shifts managed by a Trans Go HD2 shift kit, and then TRS backed it up with a custom driveshaft from Inland Truck Parts and Service in Kansas City. A Lokar shifter sits inside the car.

As is the case with so many of these all-out builds, a replacement hydroformed steel subframe and suspension system from Detroit Speed sits underneath the front of the car. It includes the company’s proprietary suspension geometry, made possible by tubular upper and lower control arms, new forged spindles, specially valved DSE/JRi coilover shocks, a splined sway bar, and a power rack-and-pinion steering assembly. It is designed to provide OEM-level quality with substantial performance improvements.

In the rear of the car, mini-tubs are in place for extra tire clearance and one of DSE’s QUADRALink suspension systems surrounds a Ford 9-inch rearend housing. The QUADRALink system uses high-durometer rubber bushings in the upper and lower control arms, which combines high-quality ride comfort with serious performance capability and is right at home under this high-powered ride. The included Panhard rod works in conjunction with DSE’s Swivel-Link technology to prevent binding, while the DSE/JRi aluminum-bodied coilover shocks keep up-and-down motion under control. Dave could have used a suspension system with rod-ends that would be geared more toward track performance, but for the intended use of the Camaro, this system is just the ticket.

The car rides on custom-coated Boze Alloys Clutch wheels and Nitto Invo tires, and a full set of Wilwood four-piston calipers are at the corners. Wilwood’s master cylinder and proportioning valve are also used to maximize the braking system’s capabilities.

With the running gear in place, The RestoMod Store turned its attention to the Camaro’s exterior, where many, many custom touches were applied to set this dazzling ride apart from the crowd.

The RestoMod Store built a custom steel hood for the car, and then figured out how to modify a 2018 Camaro ZL1 grille and mount it into the nose of the car. They designed and manufactured front bumpers and a flush-mounted rear bumper, shaved the door handles, and extended the nose. In addition, a new front splitter with ground effects was built, and the team altered the body lines with fabricated wheel flares that flow as if they were
designed by Chevrolet, yet tuck the wheels perfectly. The custom taillight panel hides the fuel door and mounts the billet ’69 Camaro taillights, while the front parking lights have been removed and turned into turbo inlets to
guarantee the snails a solid supply of fresh air. Smoked glass from Auto City Classic was set into place, and lastly, dropped a set of KaTur Angel Eyes Halo headlights into the buckets.

Inside the car, Karen Ethridge and Michael McLin designed and installed a completely custom interior, based around Procar front bucket seats, leather upholstery, custom door panels, and a custom console from Modern Classics. A Billet Specialties steering wheel spins on one of ididit’s steering columns and Hush Mat was laid into the interior to quiet the car down. A black cut-pile carpet from ACC finishes it off.

Chris McLin installed an audio system with a Pioneer AVH-4201NEX head unit and Hertz speakers, and a Vintage Air HVAC system was set into place. Those Missouri summers can get hot, so this was the perfect final touch.

“We had a great time working with Mike and Michael throughout the whole build process. Their designs and ideas always seemed to bring about decisions that Jamie and I would differ on, such as the first-gen Camaro rear taillights, the color choice of the split bumpers or calipers, to deleting the foglights to make use of the space for the twin-turbo intakes. We might not have always agreed on ideas to begin with, however, once we set a
course of action we both agreed the correct choice was made,” says Dave.

The collaborative approach to finish this car was a split decision, but ultimately the right one. Don’t you agree? 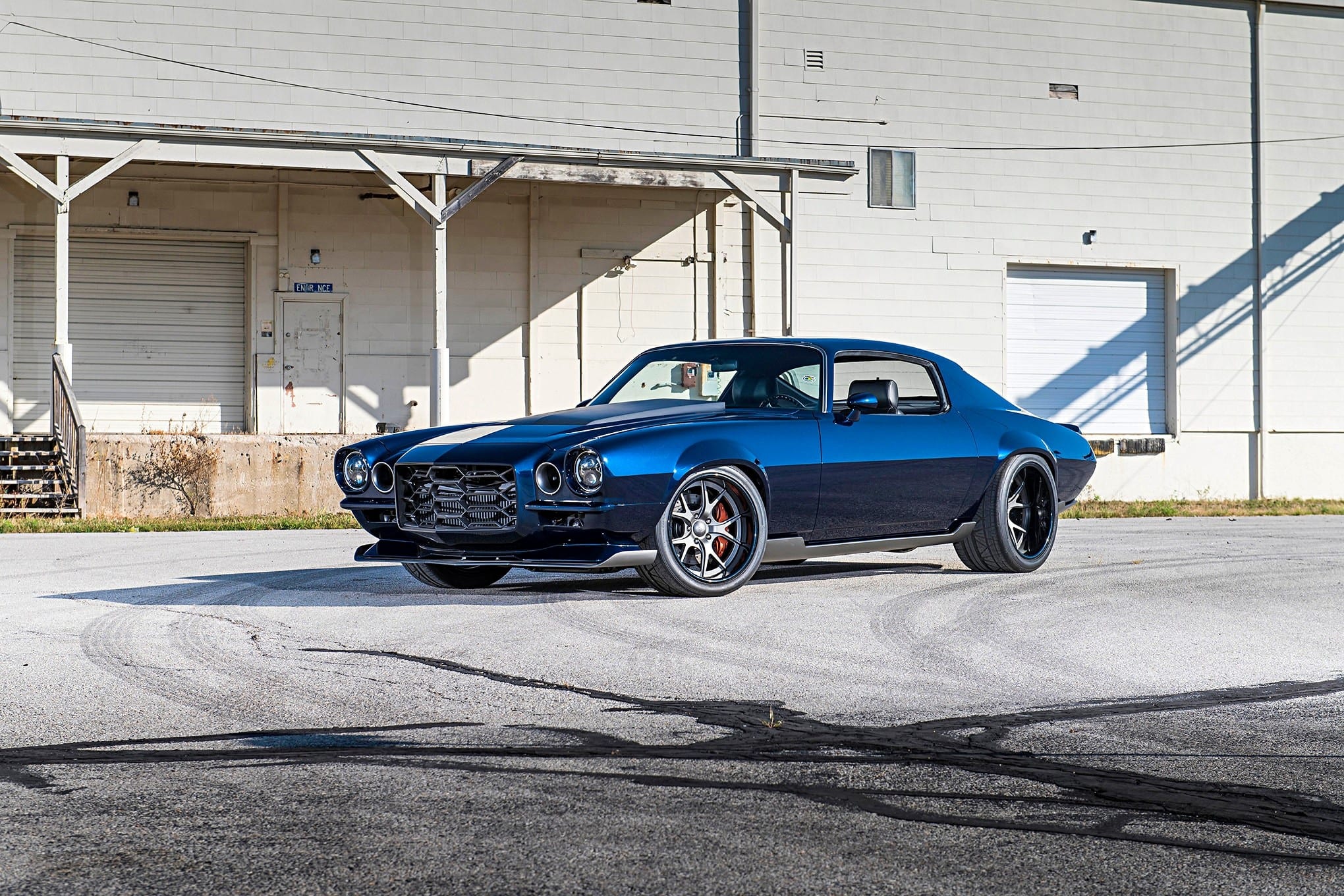 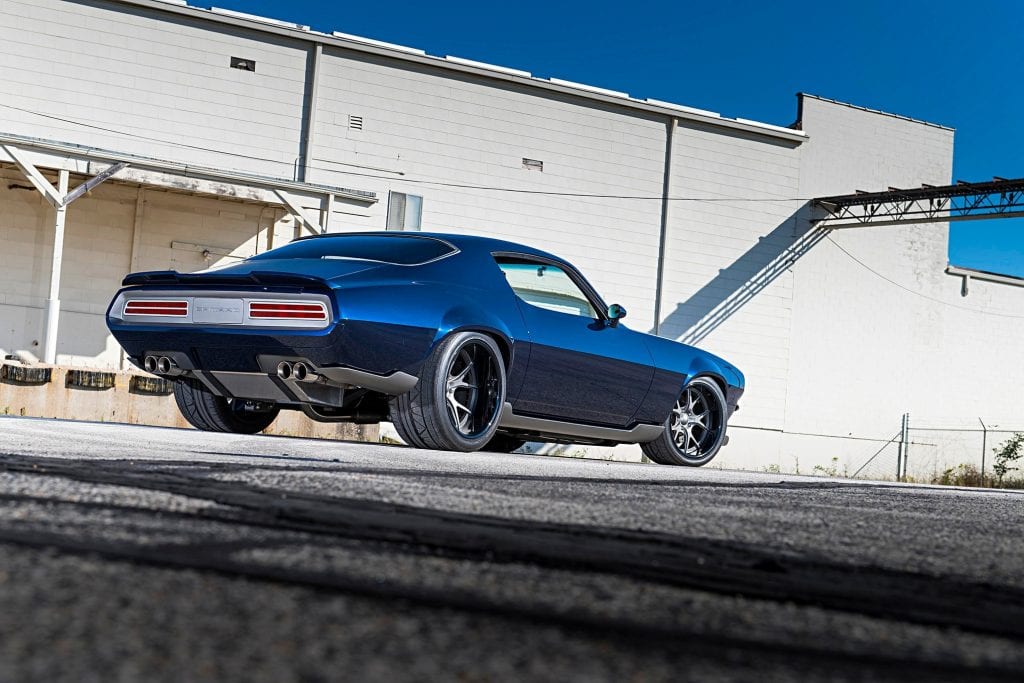 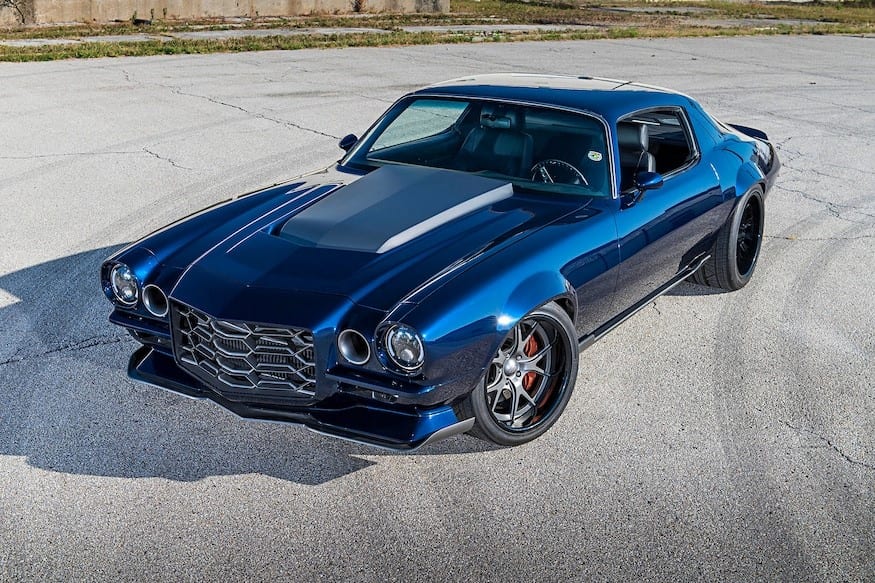 © 2022 All Rights Reserved by Boze Alloys