This awesome pro touring Nomad sporting a set of Boze Traction and Traction Concave forged wheels was just featured in Hot Rod Magazine. Here’s what they had to say about it:

“One of the most curious things about the automotive enthusiast hobby is that there are so many different reasons someone falls in love with a particular car, engine, or vehicle nameplate. We thought we had heard all of them until we had the opportunity to chat with Roger Meyer about his stunning 1956 Nomad, designed and assembled by Mike McLin Sr. and his team at The Restomod Store in Independence, Missouri.

Taken by itself, the Nomad is definitely a unique vehicle, but what sticks out in Meyer’s mind—and one of the most unique reasons we’ve heard for undertaking a build—is an experience he had many years ago as a young lad working at his first job. “I worked in a gas station in my high school years, and when I first hired on they told me to go out and check the tires, check the oil, fill it up with gas, and wash the windows and all that,” says Meyer.

“They were watching me with this ’56 Chevy and I couldn’t find the filler, so I needed help. Dropping the left taillight was where the filler was, and everyone got a big kick out of my ignorance. The small things in life tend to affect you, and because of this I’ve always loved ’56 Nomads. I had to have one.”

Many years passed between that initial interaction with a ’56 Nomad and the day when Roger brought one home, and even longer to complete—11 years to be exact

The car—if you could call it that—was purchased from a broker in Austin, Texas, back in 2007. It was purchased in completely disassembled form, with the body removed from the frame and the rest of the pieces scattered about in boxes. He also changed directions several times before finally enlisting The Restomod Store to create the stunning Nomad seen here.

“The first six months was spent buying manuals and surfing the Internet to learn what I was missing. As it turned out, I was missing just about everything except the frame, primary body, and front clip. And even with that, the quarter-panels ended up needing to be replaced, too,” he says.

“During the build process, I discovered I must have the heart of a woman, given the number of times I changed my mind. The car moved from a daily driver to an absolute showpiece.” Over the first several years of the build, Roger learned much about himself, his own talent level, and the skill it takes to complete a car with this level of fit, finish, and impeccable attention to detail. Although he enjoyed doing some of the work in the very beginning, he realized he was out of talent early in the process. “I knew that I wasn’t going to see the finish line myself. I got recommendations from various people, and Restomod was my choice. I’m glad I went that way,” he says.

The Restomod Store eventually had to redo much of the work Roger performed during those first several years. With the decision to turn this car into the one-of-a-kind Nomad, The Restomod Store improved every aspect of the car’s design and blended their vision with the details Roger felt were important.

Originally, Roger had selected a small-block Chevy with a blower to sit in the engine bay, and although it cranked out a ton of horsepower, he ultimately made the decision to sell that engine off to one of Restomod’s shop employees and move in the direction of an LS3 crate engine straight from Chevrolet Performance.

“It was a great engine, but I just wanted an LS3 and more of a low-profile engine without the blower. I didn’t want a blower popping through the hood, and I could keep a low profile by going with the turbos. I could make it pop without having the big blower sticking out of the hood,” Roger says.

The choice of the LS3 contributes to the well-engineered, clean look underhood. We can appreciate a clean layout as much as the next guy, and the LS3 makes use of a Top Street Performance Velocity intake manifold, TSP oil pan, custom Comp camshaft, and most importantly, a pair of Precision Turbo 6266 turbochargers pumping 10 pounds of boost pressure through the nose-mounted intercooler. Although the turbos—and engine—are capable of handling much more boost he says the way the car is set up right now is perfect for him. “It is mean. It is tight, it sits well, and it performs unbelievably. As a matter of fact, it’s scary. It drives like a dream. It rides down the road well, handles well, and the acceleration is unbelievable. It could even be dialed up another couple hundred horsepower,” he says.

With an estimated 650 horsepower on tap, it was an easy choice to put a Turbo 400 transmission behind the engine then supplement it with one of Gear Vendors’ overdrive packages to turn it into a six-speed transmission, which is perfect for cruising.

The interior of the Nomad was one place where Roger had specific wants and needs, and was guided by Mike McLin Jr.—who executed the vision—to come up with the finished product. Rather than keep this car stuck in the ’50s with rudimentary instrumentation and stark creature comforts, one of his stipulations was to modernize the interior and present the best Nomad possible given the technology available today.

“I love the ’50s look, but I didn’t want the ’50s feel when I drive it. I wanted it to be modern and up-to-date with all of the technical instrumentation, radio, and data screens. I love technology,” he explains. “We talked through it. Truly, they were the talent behind the modernization of it.”

To that end, a set of Dakota Digital VHX series gauges—including digital HVAC controls—was integrated into the interior, along with Kenwood CD/DVD player, four Hertz loudspeakers, and the complete custom interior treatment. This includes TEA’s seats, custom door and side panels, and a custom full-length console all created and manufactured at The Restomod Store. Relicate leather in Old Ranch has the distressed look and covers all of the surfaces inside.

No car of this caliber is complete without a jaw-dropping paint scheme, and Mike McLin Jr. answered the call with a custom orange-and-pewter custom mix using DuPont Axalta urethane pigments. Pinstriping By Eric finished off the appearance with a two-tone stripe laid down between the colors. Everywhere you look on this car there’s something else to catch your eye. “Splitting the rear bumper was something we talked about and came together on. The front bumper is from a ’55 Chevy and has been turned upside down. It fit the profile to keep it low and sleek. It’s been a showstopper at the shows it’s been to. There’s a lot to see on it and it’s just done impeccably: inside and out, under, and on top. One of the things that’s most stunning about it is the paintjob, and DuPont has chosen it to be in the 2020 calendar,” says Roger.

Isn’t that what we all want—a car that’s cool enough to grace the calendar of a major automotive company? Roger Meyer and the guys from The Restomod Shop have created one of the most unique and interesting Nomads we’ve seen yet, and it’s all because a young boy was fascinated by a behind-the-taillight filler neck.” 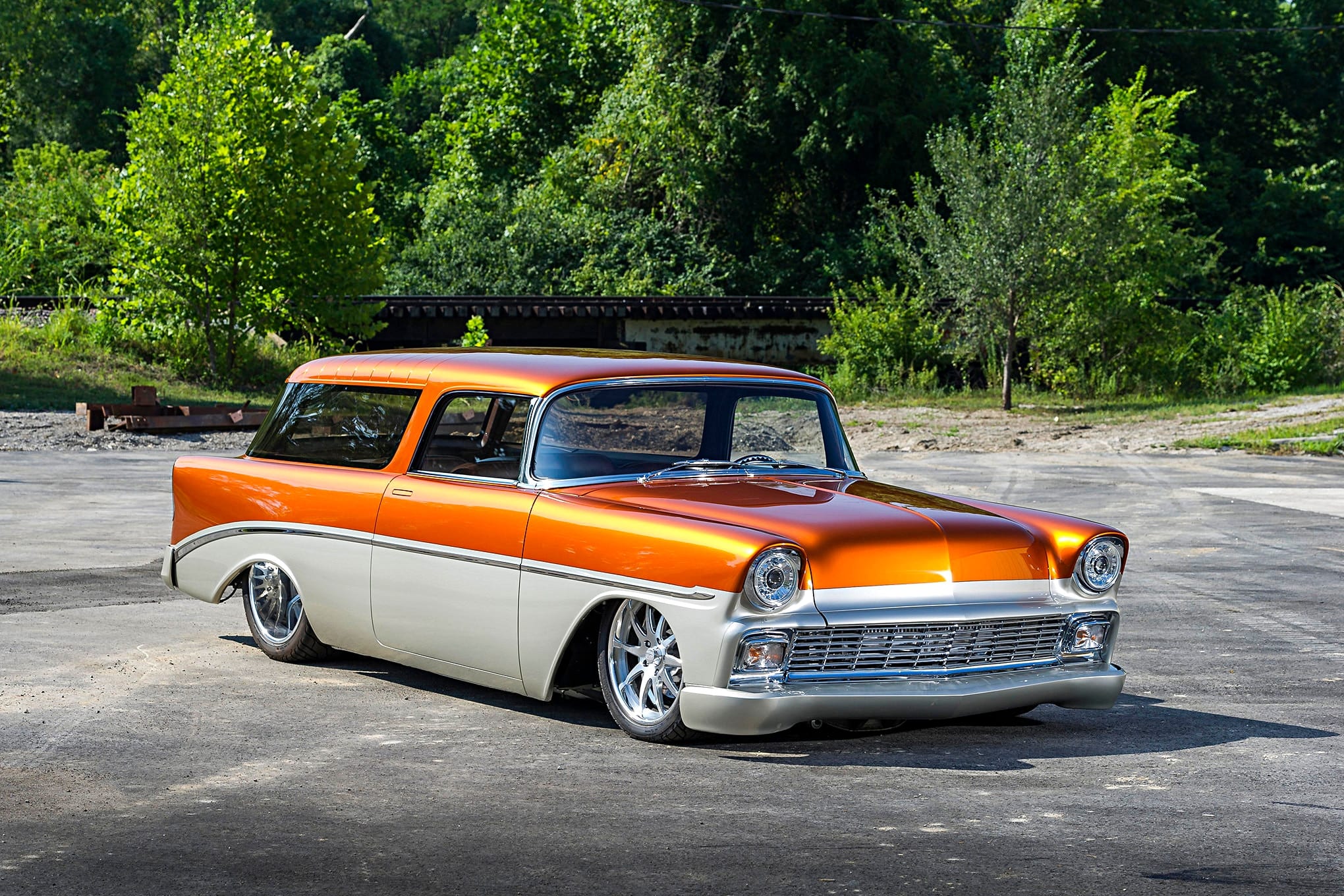 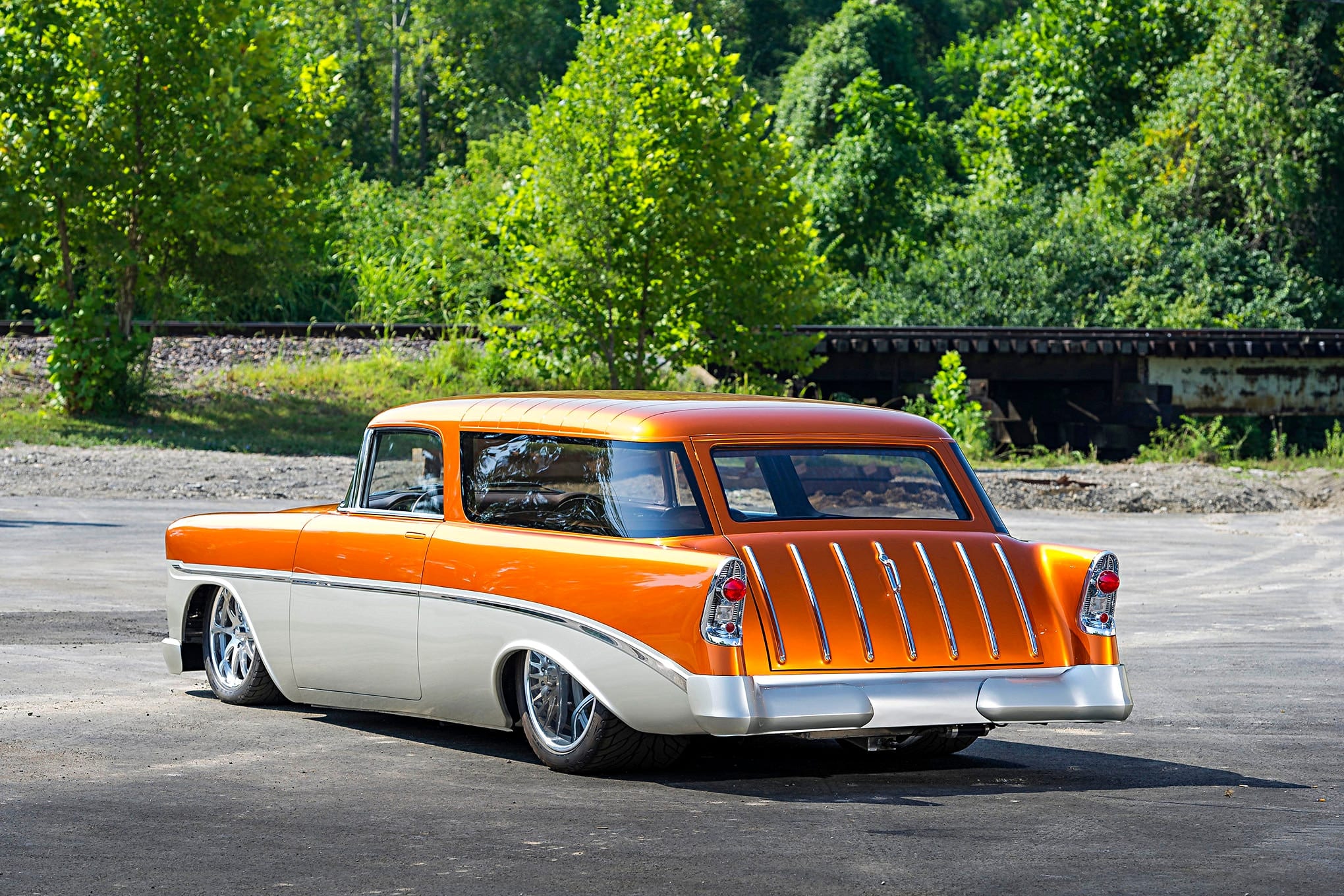 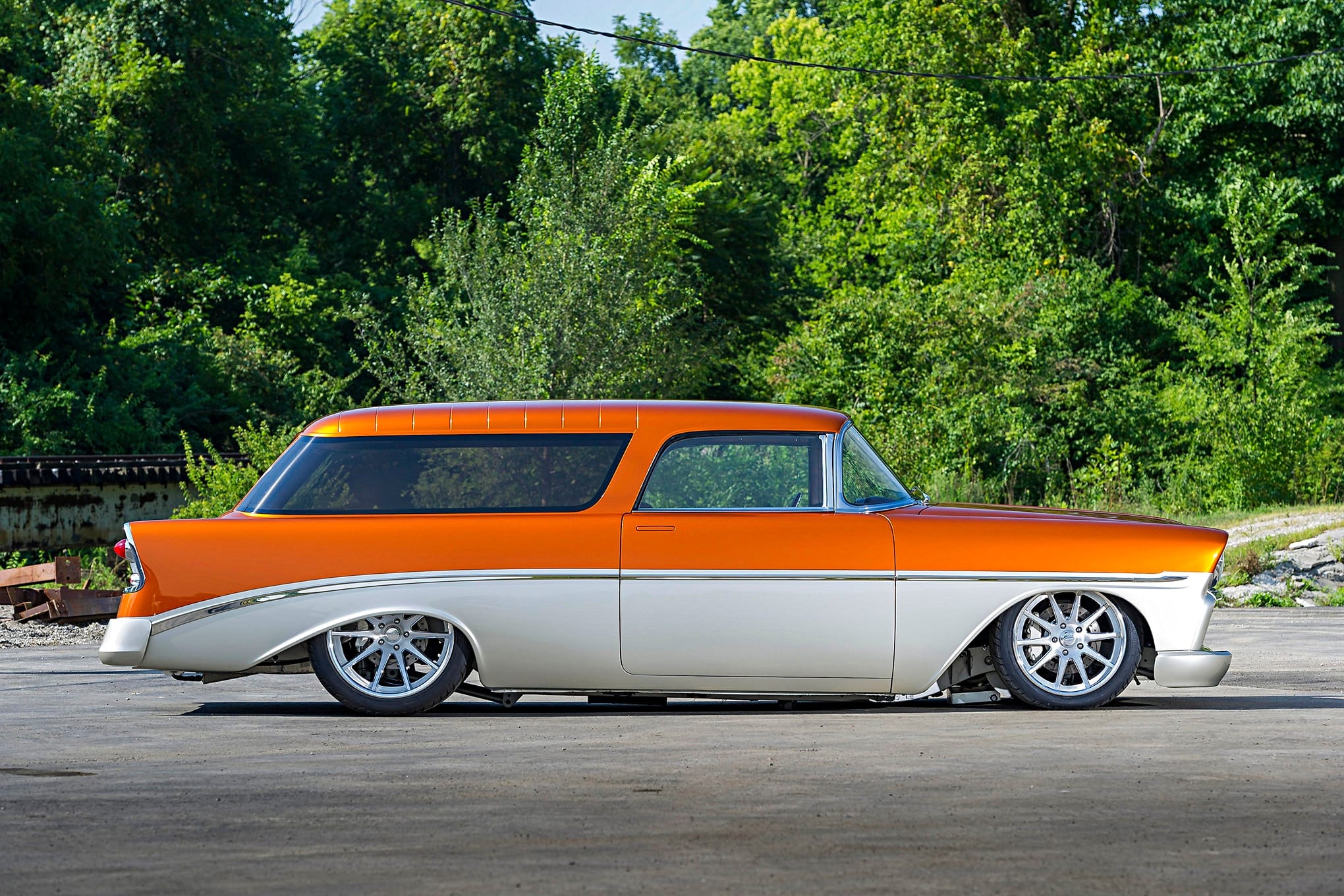 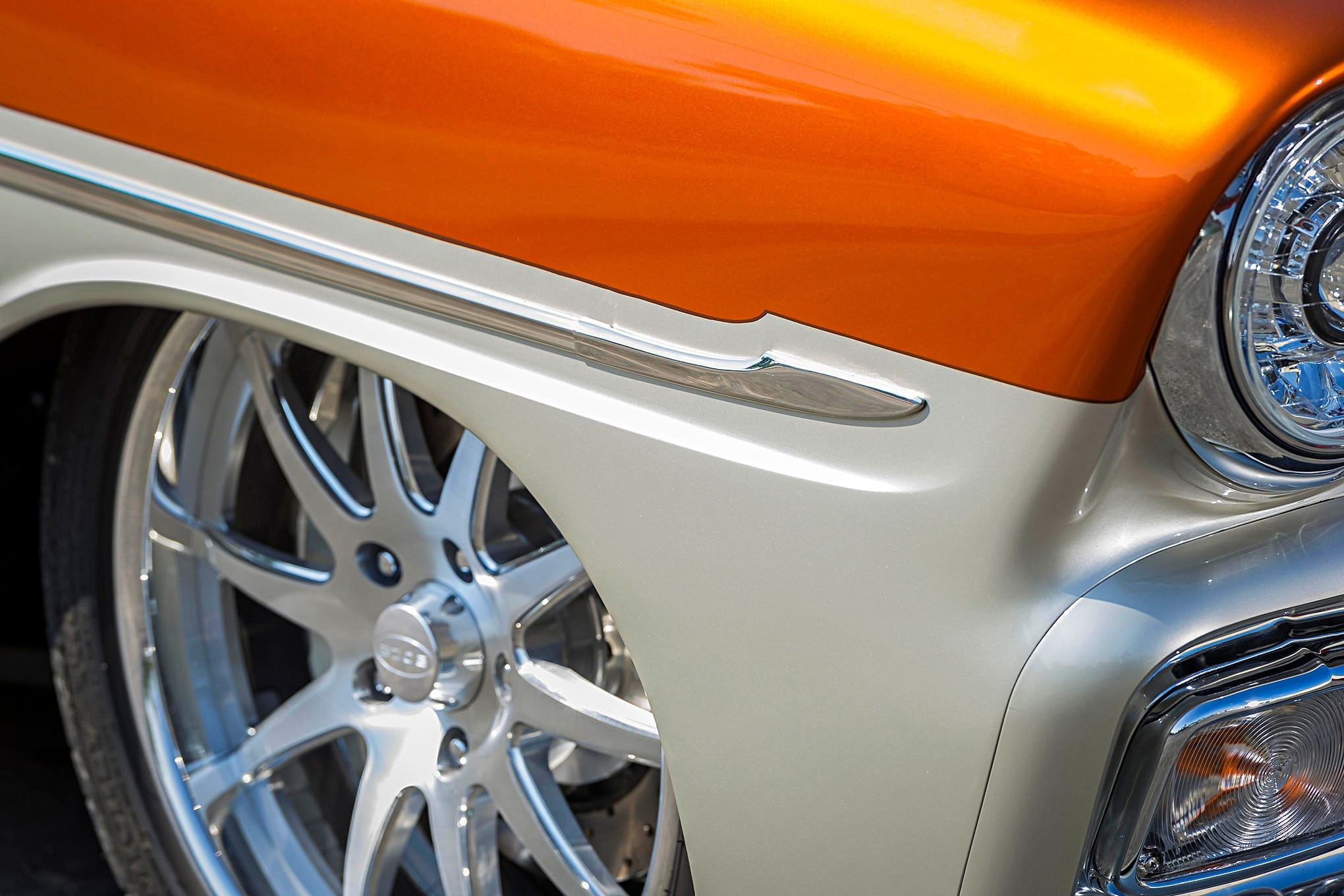 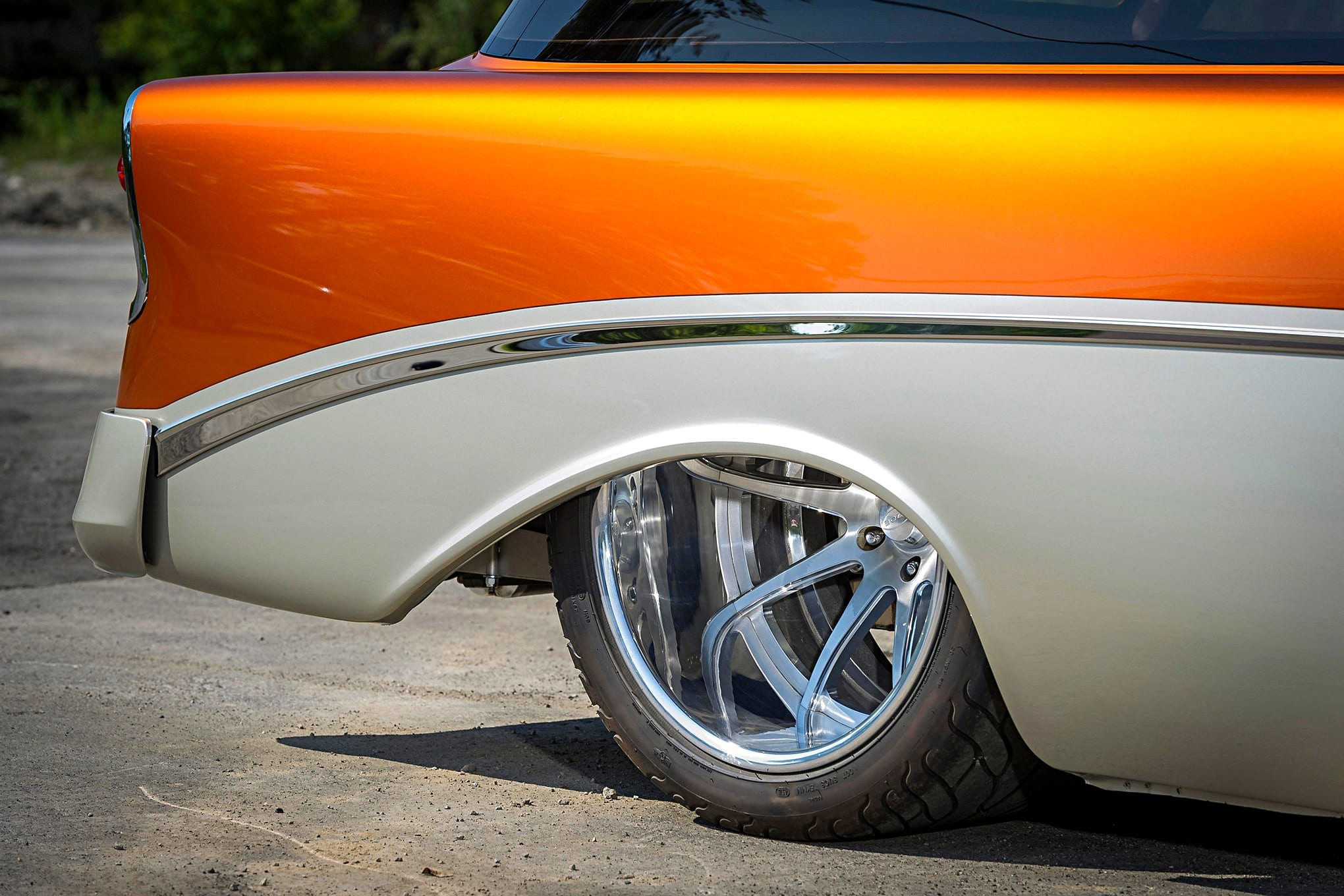 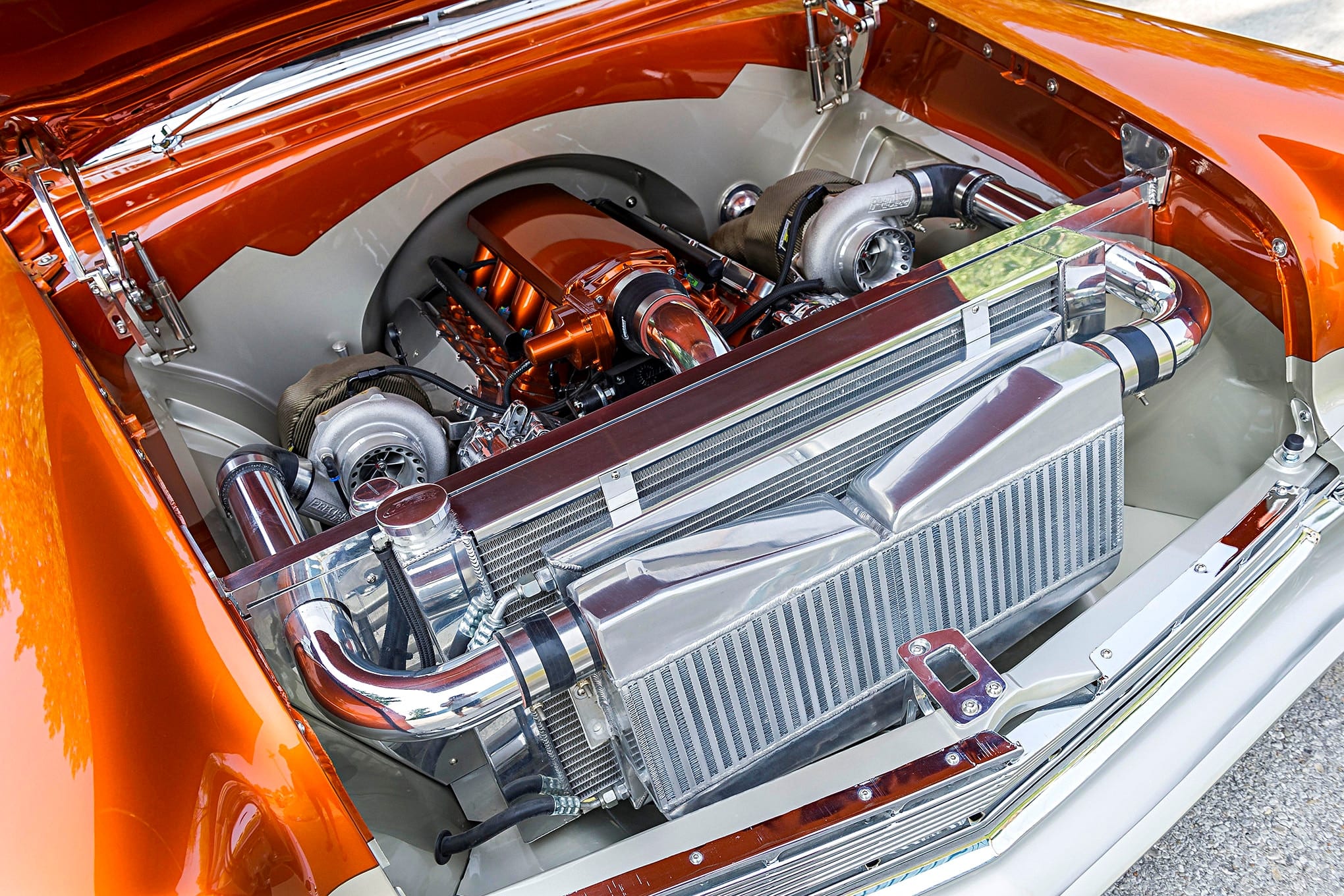 © 2020 All Rights Reserved by Boze Alloys

Check out all the latest styles!